Academic Doping: The Rise of the Study Drug 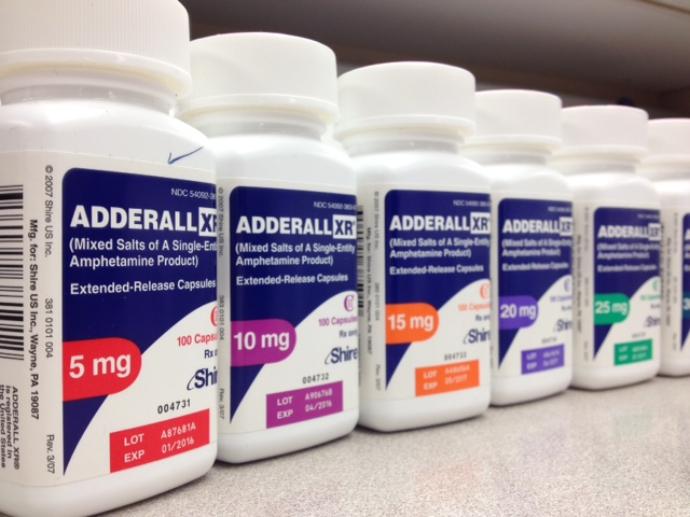 It’s 2 a.m., you’ve written one sentence for the five-page paper due in a few hours and you haven’t even started looking at your notes for the big test; then you realize your coffee supply is running low. For students, this is the most dreaded week of the year—finals week. There are many kinds of shortcuts students find to help get through the tough time. While some depend on caffeine, others are turning to a dangerous and misused pill to give them an extra edge—Adderall.

It’s easy to fall into the trap of waiting to the last minute and begging for more hours in the day. Adderall appears to give students and extra kick and it seems to be getting easier to find, even if it means breaking the law. At what price are they willing to pay for a good grade?

It’s a familiar feeling—the anxiety of a looming due date, the hundred of pages waiting to be read and the overwhelming pressure to succeed. Between sorority socials, work and heavy pre-med courses, Michelle* rarely has any free time.

“Usually, my course load runs about 13 to 16 credits a semester so, with work and all that it’s not too bad, but tends to get stressful near the end like it is right now,” she said.

Michelle, like many other college students, masters in the art of procrastination. When it gets down to crunch time, students look for shortcuts.

“One week for the last midterms, it was six tests in one week. It was really hard to focus on one thing at a time and not be like ‘oh, I’m studying for this right now, but I have this to study for too,’” she said.

Jason* is in the same boat. He’s a budding entrepreneur studying business and could use a little help prioritizing.

“I am diagnosed with being a young male, which automatically makes us a little bit energetic, which I think is the stem of the problem,” he said.

When the race against the clock is an uphill battle, and coffee or an energy drink isn’t enough, students are turning to a dangerous alternative for a study aid—Adderall.

“I use it during the day just so I knew I could get stuff done so I can sleep later that night,” Michelle said.

“When kids are taking Adderall, they’re having a similar experience as someone who is using cocaine or meth,” said J.J Lee, a drug and alcohol counselor.

That’s because Adderall is part of the potentially addictive amphetamine family. Those “uppers” tweak the chemical balance in the brain.

“A person can actually over dose on this medication,” Lee said. “It speeds up the heart and people who aren’t supposed to be taking these medication would take more than they’re supposed to have ended up dead.”

Both Michelle and Jason haven’t been diagnosed with ADD or ADHD; they both acquired their pills from friends who have prescriptions.

“I was like ‘why not?’ I know it’s not like my particular thing. I know addiction is pretty powerful for some people,” Jason said.

“My conscience, I guess you could say, always told me it was a bad idea. It’s prescription drug, so that aspect of it is what’s scary,” Michelle.

In fact, Adderall has become so easy for students to get, they no longer need to depend on their friends for a taste. All they have to do is look up symptoms online and then try to fool a professional to get diagnosed.

“Psychiatrists are going to get as smart as kids and realize that some of these symptoms can be feigned,” Lee said.

According to a 2007 study done by substance abuse and mental health services, about 6.5% of fulltime college students used Adderall nonmedically and about 30% of those students admitted to abusing cocaine.

“I wouldn’t say that Adderall leads to other illicit drugs,” Lee said. “I can say that the feeling the sense that ‘well, I just did that and nothing bad happened can promote the conception that it’s okay to try something else too.’”

“It doesn’t have that same taboo as those other drugs. Nobody really thinks of it as that,” Jason said.

“That’s why people drink a cup of coffee; that’s why people go have a beer—they just want to have a little bit of an alternative reality,” Jason said. “It just made me feel different for a few hours. Whether I wrote a more effective paper, who knows, who really knows.”

Michelle and Jason ended up doing well their tests and papers while on Adderall, but they’re so uncomfortable with the side effects they’ve suffered, they will think twice before taking it in the future.

“The 30 did make my heart rate speed up a little bit and you get hot and you forget about eating so you don’t really eat,” said Michelle. “That’s kind of a scary aspect to it.”

“You’re rapid moving. You’re armpits are sweating a lot and I never perspirate and it totally makes me sweat from my arms,” Jason said. “I woke up for the next two nights with sweat around my neck. I’m really not a sweaty guy at all so that was kind of weird.”

The University of Nevada, Reno does not take drug abuse lightly. If students get caught misusing Adderall on campus, they will be reported to the police along with facing disciplinary probation and may be referred to education and treatment programs.

However, if they get caught distributing Adderall, they can be put behind bars, face a year of disciplinary probation, up to two years of suspension or even get expelled from the university.

The university has set up several safeguards to minimize abuse. Before diagnosing students or issuing prescriptions, students are required to go through extensive testing and evaluations that could take up to six weeks.

* The names of the students have been changed to protect their identities.